Exciting things in the works!

And things are going strong with Young Southpaw. The Young Southpaw Part Of An Hour podcast and the Etcetera ETC With Young Southpaw podcast are both now weekly. I’ve had some great guests on the ETC show – Mat Osman from Suede, author John Higgs, Steve Kilbey from The Church. Check it out!

The Quietus gave Young Southpaw’s ‘The Lost Archimedes’ album a great review – “What was evident after each listen was how funny the album was and how intricate each track was…This isn’t your usual spoken word/comedy album where the set ups and punchlines follow each other. It’s far more interesting.”

Been a long time. What a year, eh? Hope you’re all holding up as well as can be.

“Trying to find his way back to the bar Crossroads where he saw that pretty lady, Southpaw’s phone has stopped giving directions. It’s now up to his own intuition to guide him, as he ponders how interdimensional reptilian pancakes, the Beatles/Stones rivalry, an action figure of Jean-Paul Sartre in KISS make-up, and so much more will play into his plans to ask her out.”

Very pleased with this one. At the start of lockdown I started going over my notes for it, recorded into my phone over the past six months, and ended up rewriting about half of the story. Recording such an out-there tale during lockdwon really tested my sanity haha, but was totally worth it

I also released a collection of 20 demos that I recorded in 2018, ‘Not Just Lamps But Pure Emotions’. These are ideas for the instrumental trio I always wanted. I was set to record an album of some of these at the beginning of 2019 but by that point Young Southpaw was well under way and I thought best to go with that. The title comes from a sign I saw in Angoulême, France in 2014. It was my first year visiting the comics festival there and late on my first night in the city, I turned a corner and saw the words, in English, NOT ONLY LAMPS BUT PURE EMOTIONS emblazoned in a shop window. I wrote it down as a great phrase. The next day when I went back to take a picture, although I’m sure I was on the same street, try as I might I could not find the shop. It was one of those magic moments that open up for you for simply a small window in time.

Here’s a song I wrote back in December, a little number that I don’t think needs any more – ‘Dive Thru The Blue’

I also put the H Bird ‘Danger Makers’ EP up on Bandcamp. Recorded for a radio session that never happened, it features a new version of the title track, a cover of Lifestyle’s ‘Are You Coming On To Me?’, and the what was to be our last song, ‘A Millionairess In A Ruby Ring’

And I recorded a cover of ‘About A Girl’ for Simon Indelicate’s ‘The All About A Girl All The Time Radio Hour’, which features 42 versions and counting of the Nirvana song. Was fun to do. Mine sounds like Lou Reed covering ‘Common People’ with Johnny Marr & J Mascis on guitars.

Writing-wise, I had an excellent conversation with Robert Forster about his 13 favourite books for The Quietus.

I did a Live in Lockdown Young Southpaw set for Joyzine, which was a lot of fun to do. New material about The B-52’s at the beginning then the ‘Nietzsche, Time-Traveling Wu Tang Fan’ & ‘John Lennon Séance’ stories. Also another IG live show, an interview with CT comic Manny Sierra about KISS, and a Social Distancing PSA.

A couple new episodes of The Young Southpaw Part Of An Hour podcast. And there’s been more interviews on the Etcetera ETC With Young Southpaw podcast, talking to Desperate Journalist, Mikey Georgeson, The Indelicates, Rob Crean, John Andrew Fredrick, and Nick Grunerud. Etcetera ETC is now on Spotify too

Lots of stuff going on. I’m currently in Los Angeles. Big news is that I’ve started a new interview podcast  – Etcetera ETC with Young Southpaw. Had some great guests so far – Kieron Gillen, Dave Hill, Lily Rae – and more ace ones lined up. Do give a listen. And if you’d rate, review, subscribe, etc., much appreciated!

The Young Southpaw Part Of An Hour story podcast still going strong. Very pleased with the output here. Groups of 10 episodes are collected as Dekalaugs here, do give a listen. And if you do feel like kicking over some coppers for them, thank you very much.

Some writing has gone up:

Interview with comics artist Elsa Charretier for The Comics Journal

I did a cover of The Go-Betweens’ ‘You Won’t Find It Again’. Love this song, it really spoke to me my last couple months staying at my grandparents’ house in CT before we sold it

A great conversation on The Mangina Dialogues podcast

The first ‘Nick Cave’s Bar & Other Tales’ show was a great success. We’re doing it in Boston this Sunday at ONCE Lounge in Somerville. Come on out! 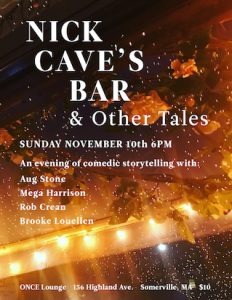 BAT SOUP is taking off! The third New Haven edition features the hilarious Dave Hill on September 3rd and we’re going back to Brooklyn on August 31st for an early show at with the awesome Kate Willett and Rob Cantrell 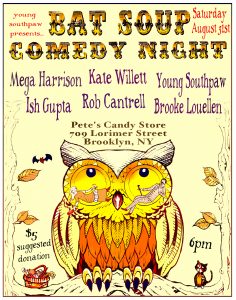 I’m also starting to do shows where I tell my ‘Nick Cave’s Bar’ story. First one will be Saturday October 5th at Pete’s Candy Store in Brooklyn, 6PM

Hope to see you there!

‘Young Southpaw serves up something strange with Bat Soup Comedy’. Great piece about me on Vanyaland!

I did my 100th stand-up set last night! Check out my surreal alterego Young Southpaw if you haven’t already. I’m also performing as myself, telling stories of my adventures across the globe. Do get in touch if you’d like me to come perform

“I realized I was loving every second of the insane human tornado that was the second edition of the Bat Soup comedy series. Organized and emceed by local surrealist comedian Young Southpaw, the lineup and its jostling forces—braggadocio and vulnerability, irony and candor, buoyancy and cynicism—attracted and repelled, and sure enough, I was magnetized.” – excellent review of my BAT SOUP II comedy night at The State House in New Haven, CT by Dan Mims in Daily Nutmeg. Mr. Mims really captured what I’m trying to do with both Young Southpaw and BAT SOUP.

Come see us in Boston & Brooklyn as we take BAT SOUP on tour at the end of July!

Listen to Brooke Louellen & I talk about the upcoming BAT SOUP Comedy Night on the Pint O’Comics radio show! We cover Chinese metaphysics, surrealist toasters, being draped in a bear skeleton, and much more…

And COME TO THE SHOW!

Second BAT SOUP Comedy Night, y’all! The first was such a success we’re doing another one. Come down! It’s gonna be fun! 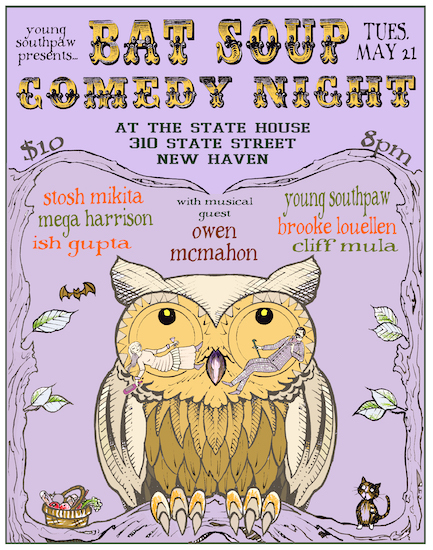 First Young Southpaw Presents…night, y’all! I’ve got some very funny comedians on the bill. And joining us is Owen McMahon, one of my fave new musical discoveries this year, whose songs sum up perfectly to me what it’s like to hail from CT.

Come check out the live show! All this absurdity distilled down to its essence.

Busy busy busy with Young Southpaw. Great review of the podcast from popbollocks.com:

“From the existential thread that ties Jean-Paul Sartre to Jon Bon Jovi, to the skinny on what’s floating in TLC’s ‘Waterfalls’, and the possibility that Al Pacino is coaching boxing kangaroos in space, wise-fool Southpaw’s ramblings lead listeners on a surreal journey through doors they didn’t even know existed, into a highly original, deeply funny land of pop culture confusion.”

The first ten podcasts have been collected as Dekalaug 1: The First Ten Podcasts . Available at Bandcamp in exchange for an email for the mailing list, or just sign up for that here.

Performing in NYC a lot. Events are listed at the Young Southpaw Facebook page.

I did a Young Southpaw interview with the Pynchon In Public Podcast, which is one of my favourite things Southpaw has done.

Thanks for listening! Come on out to a show soon!

PLUS Young Southpaw Live Dates in the Northeast

Best Of 2018 Counterforce Episode – my favourite songs, comics, books, films, and tv of the year

We’re discussing ‘Bleeding Edge’ on the Pynchon In Public podcast this season. I’m a regular on the show now and Bo & I composed the new outro music. ‘Bleeding Edge’ episodes start at #69. I also make guest appearances during the second half of the ‘Gravity’s Rainbow’ season.

Very pleased with the latest Young Southpaw Part Of An Hour episode too.

I’ve been performing live as Young Southpaw. Listen to the “At The Movies” spoken word comedy album and The Young Southpaw Part Of An Hour weekly podcast here. Do get in touch about Young Southpaw coming to your town.

Latest episode of The Counterforce podcast up now. A very interesting interview with James singer Tim Booth. We spoke about bodywork, meditation, the unconscious & creativity, politics, Patti Smith, and a whole lot more.

Two of my picks were included in ‘The Top 100 Albums Of The Quietus’ Existence’ , Jah Wobble & Julie Campbell’s excellent Psychic Life and The Indelicates’ masterpiece Songs For Swinging Lovers, the latter having a blurb by me.

Be Prepared and The King Of Birds reviews for The Comics Journal.